skip to main | skip to sidebar

Most of what I do is now taken care of on my label's blog. Check it out:

Purhcase some music direct from us: http://www.surus.co.uk/2nd-drop-records/

My September 2011 reviews for DJ Magazine. 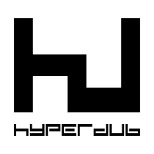 King Midas Sound
Earth A Kills Ya - Mala Remix (Hyperdub)
This has a Kuedo remix of of KMS's 'Goodbye Girl' on the A-side, which is nice, but essentially unremarkable. Toss it over and you'll find a much richer province. Mala, one half of the legendary Digital Mystikz and owner of Deep Medi, opens up the guts of the tune and yanks out the meaty organs leaving the essentials for life: heavy dread vibes dialled down further into a steppah's funeral march.
8/10 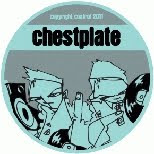 District
Haymaker (Chestplate)
Bowling in from the Midlands comes a new face with a heritage sound. It's no wonder Distance picked this up for his label, these three tracks could easily be a shared 12-inch from himself and Cyrus. As Youngsta, Tunnidge and Jack Sparrow are all supporting this, you'll get the sound architecture right away: icy, overcast and mordant angles that only really strike a chord when your head's fuzzy with weed and buried in the scoops.
6/10 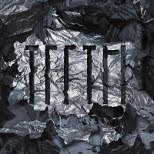 Teeth
Swarm/Shift/Sequence/Spawn (Ramp)
Yes, that is the title and confusingly not the title of the four tracks on this EP. So, with that cleared up, let's pop the surgical gloves on and get up to our elbows in this new offering by Mr Teeth from Helsinki. If you stitched the tracks together they would make a nice little quartet, as 'Frequencies' and 'OJ' build layers of drums, 'SW' flips the light switch with rays of blinding synth work and '19eme' is all washy emo mulch.
7/10 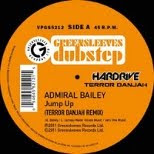 Admiral Bailey
Jump Up (Terror Danjah Remix) (Greensleeves)
The last few remixes of the Greensleeves catalogue have been OK, but not overly scintillating. Here a dancehall legend gets treatment from the grime overlord to great effect. A profusion of beat patterns fly abound un-tethered and often at odds in true dancehall style: a Mala-esque bassline, replaced by a pastiche hardcore Amen, betwixt a funky poke for a truly bashment experience. Shame the dub doesn't go to town on the effects, but otherwise pretty damn ire.
7.5/10 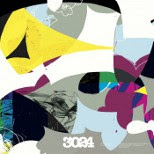 Instra:mental/Trevino
Pyramid/Chip (3024)
As if it is a dirty, hellish peculiarity, the 3024 label announce their first split 12-inch. Wait! Has the world ended? The harpies flown from the cracks of Dante's Inferno? Nope. Good, carry on. Gracing us on the A is that pesky duo Instra:mental who have clearly missed each other on their solo pursuits as Boddika and Jon Convex and now nuzzle, reunited, to produce this electroid, clemently acidic arpeggio beasty. Some chap called Trevino pops in further electro nostalgia on the flip.
6.5/10 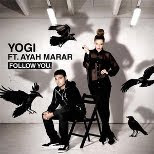 Yogi feat Ayah Marar
Follow U (Ministry Of Sound)
Oooooh, big vocal dubstep. What a fuckin' anthem. And you know it's really good when the label gets five remixes made. Trolley Snatcha doesn't hold back on the stadium-esque vibes, as emo as a gaggle of lanky bi-polar goths. Xilent clearly got the same brief as Mr Snatcha: nice, sensible radio-friendly dubstep. But before I fetch the rope, Submerse and Mike Delinquent chip in something remotely interesting … but not quite.
3/10 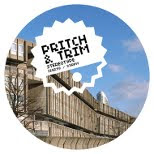 Pritch & Trim
Stereotype (Planet Mu)
I nearly wet myself when I saw this pairing of beatsmith extraordinaire Mark Pritchard and probably East London's finest MC, Trim. And whilst the quality of delivery from both is unquestionable, I find myself a little disappointed when listening to it. 'Stereotype' sounds too flippant and 'Kiss My Arse' a little vulgar. These two are both at their best when they're working in darker corners of their subconscious.
6/10 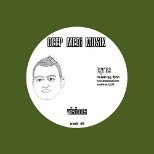 Cyrus
Visions (Deep Medi)
Never one to get swept up in the trends or pressures of modern day dubstep, Cyrus stoically continues to plough his own field in straight, symmetrical and tidy lines churning out uncompromising music. On 'Visions' the magic is in the subtle detail, counterpoint percussion intertwines with the subtlest of smokey whispers and an insistently pulsing bassline. Minimal dubstep doesn't sound much purer than this. 'The Calling' is slightly more pedestrian, but still offers plenty for those who like to listen a bit deeper.
7/10 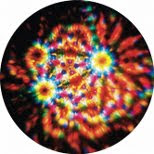 Damu
Ridin EP (Keysound)
I like the fact that Damu fills his music with so much colour. Every track on the EP explodes with its own rainbow personality.
7/10 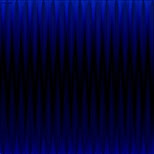 Akira Kiteshi
Transmission (Afterglo)
The last thing I heard from AK was very blunt wonky dubstep. Now it sounds like they have discovered girls and started making cool, mildly syncopated, melodic-type stuff you can actually dance to… to get in their pants, I expect.
6/10 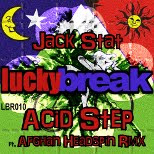 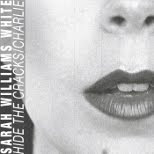 Sarah Williams White
Hide The Cracks (Minds On Fire)
This has the classic hallmarks of a bored producer knocking out a 'dubstep' remix for some non-descript vocal track. Very average.
5/10
Posted by Markle at 22:35 No comments:

I've not been blogging here lately due to work commitments and running the label. But I will start popping up my reviews page from DJ Magazine on a monthly basis at the very least! Music forward>> 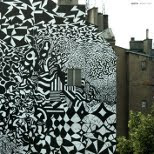 Martyn
Masks (Brainfeeder)
The Dutch rascal who dwells in the USA is one of the most successful artists to cross genres and scenes with seamless finesse, outgrowing each of them at their peak and opting to forge new paths with pioneering fearlessness. This single drops well ahead of his second album 'Ghost People' (out in October), and barely moves the goal-posts, but 'Masks' is still a cracking fragment of angular bass music that needs to be owned.
8/10 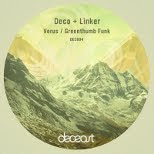 Deco and Linker
Verus (Deceast)
The fourth release on this Californian imprint comes from label honcho Deco and fellow West Coast hombre Linker, and boy can you hear the Cali heat oozing from these two. If Dr Dre had G-funk, then these two have dub-funk: check 'Greenthumb Funk' for some seriously purple vibes similar to Silkie and Quest. On the A-side, 'Verus' locks a tight riddim and rocks out a decaying technoid half-step flex, a very tidy affair.
8/10 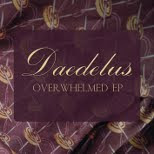 Daedelus
Overwhelmed EP (Ninja Tune)
Since the good ole days of his equaled "crunchier than a mouthful of glass and gravel" hip-hop, to the past couple of years where it has meant a very skewed take on psychedelic electronica, Daedelus's inventiveness and character has always shone through. This remix package welcomes three soldiers of fortune in the guise of Manchester's Star Slinger, London's Raffertie and New York's Sepalcure for a confection of bass-laden treats.
7/10 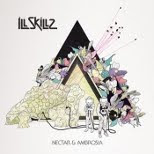 Illskillz
Fire Everyday feat Dub FX (Illskillz)
Drum and bass stalwarts DKay and Rawfull, aka Illskillz, offer up a triplet of dubstep tunes before their new album drops this summer, just to prove they can mix it up with the best of 'em. 'Gold Streams' and 'Memorizer' are both piss-weak efforts, leaving 'Fire Everyday' to mop up the effluence, luckily avoiding the emo-stained melodies for balls out beats and a bassline that punches the wind from your chest.
5/10 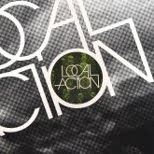 Damu
Mermaid (Local Action)
The sixth release on the Local Action label sees Mancunian new boy Damu get his first pair of long trousers with a snug four-track EP featuring three originals and one zeitgeist-channeling Juke remix from the legends of Baltimore, Rashad and Earl. But before we get too erect, let's saunter back to the rather heady 'Mermaid', which sounds like classic broken beat with a dose of nitrous-boosted euphoria, a very pleasant conclusion to an evening's waltzing.
7.5/10 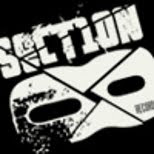 Saint Rider
D.A.T. (Section 8)
As always, a number of these records start off in a promising manner and 'D.A.T.' is no exception; washy synth lines, a few stabby piano-esque bits and a smattering of nifty claps build up to a frankly slag-infested drop. I have no doubt this goes off in the "rave" and sweaty teenagers from across the world are losing their small, underdeveloped minds to it, but it just pummeled me into a spiraling abyss of despair because of its obvious lack of originality.
4/10 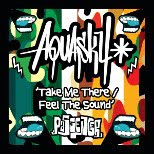 Aquasky
You Take Me There (Passenger)
If you were a joyriding, feckless little teenage shite tearing around council estates in less salubrious parts of Berkshire 19 years ago, then you'll probably also remember when massive gurn-inducing piano riffs dominated the (pirate) airwaves, and rave flyers promised never-ending psychedelic blow-jobs in a smiley-faced hinterland. Yes, Aquasky capture 1992 with aplomb, only for Cutline to take it by the greasy ponytail and slap its slack-jawed chops with a dubstep back-hander. Irritatingly infectious.
6.5/10 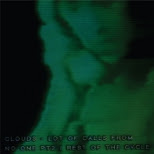 Clouds
Lots Of Calls From No One Part 2 (Deep Medi)
Flying well under the radar for some time now, the reclusive Finnish duo have popped one or two bits out over the past few years, but are far from prolific. Thankfully this can be forgiven, as they have clearly shut themselves away in a dusty, vinyl-filled basement wigging out to Dilla and Davis whilst imbibing chronic quantities of cheeba cheeba. Please buy this two-tracker as it will take you to delicately fuzzy and moodily whimsical places.
8/10

Ak0pian
Waterfoul (Echodub)
A syrupy four-track EP from the Italian producer who explores blessed out dub with syncopated techno aesthetics.
6/10

Gerry Read
Untitled (Fourth Wave)
A bright talent, this Home Counties lad is a prolific producer and is banging out raw, unadulterated house music with a hollow tip edge. Keep an eye on this one.
8/10

Tallullah
Colourblind (Transducer Records)
Did someone put the wheels back on my tricycle wonky? That's exactly what Actress does to 'Colourblind', expect spasmodic electronica with high levels of umami.
7.5/10

2 Bit Thugs
Keep The Faith EP (Corrupt Music)
Terrible name, but boy do they make brilliantly nostalgic (2-step) garage/house music to shake your fillings out. Pop this on, get loaded and have a good time.
7/10
Posted by Markle at 23:17 No comments: 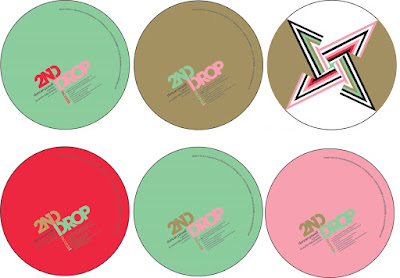 2nd Drop Records is proud to present its tenth release!

An underground legend with releases on MJ Cole's personal label, Profile, Reading lad Duncan Powell offers a classic slice of, as Jackmaster (Wireblock/ Numbers) described it, James Bond Step. A big string laden anthem, Pushing was originally given away as part of a free EP on Duncan's blog. But much like Ramadanman's Good Feelin record which they also saved from the same fate, 2nd Drop Records believed that it was too good to be a freebie and pressed it up onto vinyl.

A gold mine of musical elements, Pushing was ripe for the remix treatment and as Falty DL was a big fan of the original, and 2nd Drop being a big fan of him, they set him to work stripping back the cacophony of melody transforming Pushing into a dark, broken 2-step swing with flashes of vocals and strings to awesome effect.

The guest illustrator on this release is Audrey Rogers, a fine artist/ illustrator with a visual style which quickly resonated with the 2nd Drop guys and fitted nicely with the 12" format. Her excellent work can be found here

Pushin'- FaltyDL Remix by 2ndDropRecords
Posted by Markle at 23:56 No comments: 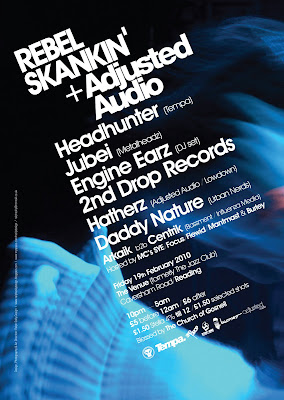 I know it's nearly the end of Jan 2010, but had to drop my big tunes of 2009. Just wanted the dust to settle and the mind to clear before I dropped this.

Twitters from the dub side